… because you can complete all working steps with only two products.

Concrete has been used as a construction material for approx. 2000 years. However, use in the construction sector in today’s bandwidth has only been possible for several decades.

Technical developments, such as the combination with steel reinforced concrete or other reinforcements, but also the development of plasticizers and retarders have made concrete into what it is today: the most-used building material in the world.

The public frequently associates concrete with major infrastructure projects, such as tunnels, bridges or other civil engineering structures.

However, the building material concrete is also widely used in urban buildings, such as apartment buildings and office buildings, garages, schools, swimming pools and sports facilities, where concrete is installed in the sub-structure and/or facing concrete.

Since the middle of the 20th century concrete has been increasingly used in countless structures. At that point in time, quality requirements and technologies were not at today’s level. Thus, signs of aging and damage are encountered, such as spalling and corrosion. The causes are complex, for many years the need for repair has been considerable.

Concrete buildings have been shaping the face of our cities for decades. Planners and builders have long time recognized the design potential of concrete, a building material that on the one hand adapts to a sober and pragmatic architectural style, but on the other hand also allows for bold architectural experiments.

Like any building material, concrete ages and requires care. With its concrete repair system, Saint-Gobain Weber offers the optimal solution for repairing the damage to structural elements and exposed concrete surfaces quickly and easily. Durably attractive concrete structures increase the acceptance and satisfaction of residents and neighborhoods and contribute to the long-term upgrading of entire urban districts and communities.

The normative framework for concrete repair

Concrete repair mortars for static-relevant and not static-relevant areas are substantially regulated in the European standard EN 1504-3. Additional technical rules for repair of concrete structures are the ZTV-Ing. "Additional Technical Terms of Contract and Guidelines for Civil Engineering Works") and the "Guideline for Protection and Repair of Concrete Structures" of DAfStb (German Committee for Steel-Reinforced Concrete).

weber.rep R4 duo satisfies the requirements of class R4 according to EN 1504- 3 as well as M2 according to DAfStb. This means that the system can also be used on static-relevant concrete structures, such as pillars, facades and abutments. Due to its alkalinity (pH value 14) concrete protects the existing steel reinforcement against corrosion. Through external influences, such as water and carbon dioxide the alkalinity of the concrete is reduced. As soon as natural corrosion protection of the reinforcement steel is lost due to this carbonation, it leads to damage to the steel-reinforced concrete structure. Through the corrosion-related volume enlargement of the reinforcing steel, the covering concrete is pushed off.

Environmental influences like strong freeze/thaw cycles, high chloride stress due to the use of road salts, acid rain, other acids, as well as abrasion and abrasion also corrode the concrete. The thicker the concrete cover, the greater the natural protection against corrosion. Consequently, depending on the type of stress, concrete is divided into different exposure classes according to EN 206 with different concrete cover thicknesses. The minimum requirement cover for class X0 (for ex. lean concrete beneath floor concrete slab) is 20 mm. The class XC4 for outdoor components exposed to weathering requires at least 40 mm cover.

In addition, damage to concrete structures can also occur through the inadequate pouring of fresh concrete. Typical application errors are: over-watering of concrete, inadequate concrete cover, insufficient compaction, or delays when pouring/casting concrete.

4 applications with only 2 products

In classic concrete repair, the standard situation is that four working steps must be executed with four different products as standard.
With its new PCC II concrete replacement system, Weber offers a practice-oriented system for versatile implementation that consists of just two products.

Both products offer dual application for classic use in the area of wall and ceiling components. This also applies to statically relevant areas, as the system complies with the highest European requirement class of EN 1504-3, class R4.

In addition to the streamlining of the product range, which simplifies application and storage, the system is characterized by excellent product properties. The reprofiling mortar can be applied in a time-saving single layer. The Weber concrete reprofiling system thus meets the highest demands on material and processing comfort with only two products. 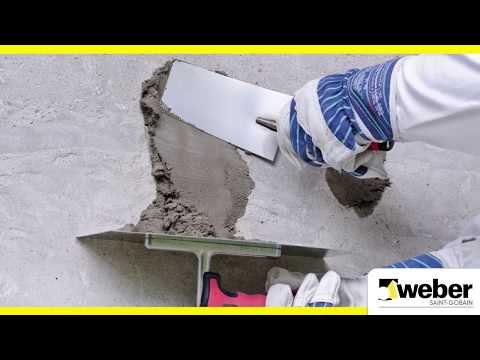